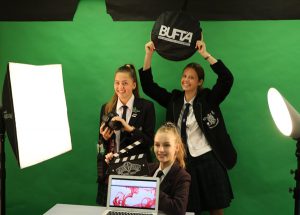 With a focus on film, television and journalism studies, Media Production and Analysis students are given the opportunity to analyse and produce a range of media works. Working independently and in collaboration with others, students will become confident and competent in using media technologies to express their ideas.

Unit learning contexts may include a combination of the following:

Students will have the opportunity to develop their understanding of production practices and responsibilities. This course has an examination component, can contribute to students’ ATAR scores and can be followed up with units 3 and 4 in Year 12.

Unit learning contexts may include a combination of the following:

Students will focus on independent and experimental art cinema as well as persuasive journalism, developing their understanding of experimental aesthetic and narrative approaches. They will be given opportunities to extend their production skills and develop their personal style and are encouraged to experiment with filmmaking technologies and conventions to express their ideas. This course has an external examination and can contribute to students’ ATAR scores.

For more information regarding the syllabus, check the SCSA website.